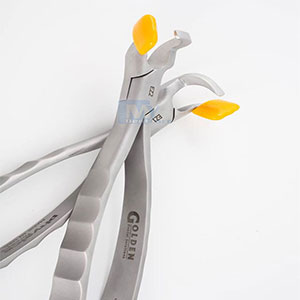 Physics Forceps™ continues to be, quite simply, the easiest to use and most clinically effective tooth extraction instrument on the market. The patented designs of our instruments and its associated patented Beak & Bumper™ technique make difficult extractions simple and predictable for all dentists without utilizing brute strength. Do your patients, your hands – and your practice – a favor, and implement the Physics Forceps into your practice today.

The Physics Forceps operate as a dental elevator rather than a forcep (as the name implies), and it uses first-class lever mechanics. One handle is connected to the “bumper”, which acts as the fulcrum during the procedure and the other handle is connected to the “beak”, which is positioned most often on the lingual or palatal root of the tooth into the gingival sulcus. The Bumper is positioned most often on the facial aspect at the mucogingival junction.

Once the instrument is properly placed, no squeezing pressure is applied to the handles or the tooth, where instead the handles are rotated a few degrees with only wrist movement until you get resistance. Once you get resistance, the rotation is stopped and the instrument is held in place for a short period of time. During this holding period, the “creep” will build, releasing hyaluronic acid, and breaking down the periodontal ligaments. If the tooth does not move during this initial hold, this process should be continued where the handles are rotated another few degrees. This constant and steady pressure is continued until the tooth releases and moves 1-3mm. At this stage, the tooth is loose in the socket and should be delivered with a pincer-like device. Used properly the buccal bone is preserved and undamaged.

The Physics Forceps with its steady unrelenting trauma to the periodontal ligament quantitatively creates a greater release of hyaluronidase in a shorter period of time than traditional forceps or elevator extractions because the trauma from those techniques is intermittent. This is what makes the Physics Forceps more efficient, faster, and less traumatic to the alveolar bone than other extraction instruments and techniques.